On 1st February 1914, the ‘Hera’, a German barque, was wrecked on Gull Rock, just off Nare Head in the parish of Veryan, Cornwall. Only five of the crew of twenty-four survived. Fifteen bodies were eventually recovered, and are buried in Veryan churchyard. Their grave, nearly 100 feet in length, is the longest in the country.

'The Wreck of the Hera' is a long historical ballad by Lucy Newlyn, set to music and performed by Stuart Estell.

Read about the ballad's composition here

You can listen to Part One here

And you can listen to Part Two here

THE WRECK OF THE HERA

The last night of January,
Six months before the war.
They were on their homeward journey,
That crew of twenty four.

Their cargo was from Chile:
Three months they’d been on board.
The night was thick and dirty
And their passage it was hard.

They were heading for the Lizard,
To Bremen homeward bound,
With a load of stinking nitrate –
Oh, the waves did crash and pound.

Their chronometer had broken;
The ship’s clock it ran slow.
For three long nights they’d seen no sun –
A biting wind did blow.

They couldn’t take their bearings
In the gale and clinging mist:
Too late they sighted breakers –
Waves crashed and roared and hissed.

She hit Gull Rock at midnight.
The crew of twenty four
Fired guns and flares and rockets
To bring help from the shore.

She took a list to starboard.
‘Man the boats!’ the Captain cried.
But two of the boats had drifted
Far, far from Hera’s side.

Beneath the sea, all on a sudden,
The good ship disappeared:
Three seamen and their captain
Were flung right overboard.

The lifeboat swamped in the tumult;
The oars floated away.
Twenty seamen shrieked and shouted
As they were tossed at sea.

Only nine men reached the foremast
Of Hera’s grounded wreck.
They clung there as the tide advanced
And rose around Gull Rock.

Further and up the sea rose
Around the stranded mast,
And the higher the crashing waves rose,
The higher the men were forced.

With no sign of help or rescue,
The first mate, lashed to the mast,
Watched what became of the freezing crew
As he clung there till the last.

He blew his whistle loud and clear
As the icy sea closed round.
He blew and blew through the freezing air --
A shrill and hollow sound.

The second mate and two sailors
Fell in the sea and drowned.
The Chief Mate died of exposure
Before the rest were found;

But just as his grip was slipping
He passed his whistle on
To a boy high in the rigging –
Then he fell and he was gone.

Oh, Gull Rock is a cruel rock –
It drowns men by the score,
But none so bleak as this wreck
Six months before the war.

Oh, Gull Rock is a cruel rock –
It sinks boats by the score,
But none so bleak as was this wreck
Six months before the war.

Oh, brave and true were the lifeboat crew
Who risked their lives that night --
Pulled by a sturdy steam-tug through
The storm, with never a light!

As soon as the coastguard saw the flares
He signalled to his mate,
Who telegrammed to Falmouth –
Not a second did they wait.

But still it was three hours before
Th' ‘Bob Newton’ reached Nare Head:
The waves were rough along the shore,
And many were feared dead.

The steam tug left them in the dark
As the wind whipped furiously --
But the lifeboat crew had missed their mark:
They were too far out at sea.

Too far to pick the signals up
From the coastguard on the shore;
Hearing only the cry of the gulls
And the black waves crash and roar.

Too far to hear the whistle blow,
Or the drowning sailors cry –
Round and around the row-boat flew
Under a moon-tossed sky.

A doctor, out on his rounds that night,
Heard faint cries on the wind;
He shone his headlights from Nare Head
To guide the lifeboat in.

A farmer came to the rescue,
Dragging a breeches buoy,
With a team of strong farm horses
And men from Portscatho.

A crowd it gathered on the cliff
The Portscatho rocket fired.
The lifeboat crew put in for help,
All shaken, cold, and tired.

Then out they went again to sea,
Rowing towards Gull Rock,
Where the wind howled cruelly
Over the sunken barque.

All on a sudden, loud and clear
There was a piercing sound -
Loud and clear through the freezing air,
Where the seagulls circled round.

Oh what a pitiful sight it was:
The boy with the whistle, blowing;
The seamen fixed hard to the mast,
All petrified and groaning.

One seaman’s mind was unhinged so,
He’d frozen hard as rock.
He wouldn’t let his Hera go,
But clung tight to the wreck.

They prized his fingers from the mast,
They got him on their boat;
They wrapped him warm in blankets
And they thawed his body out.

They took four more men from the wreck
And plied them full of rum;
They warmed them through, and left Gull Rock –
Bound for the Sailor’s Home.

Oh how the brave men rowed and rowed:
It took them all the day,
Pulling hard with their heavy load,
To make that grim journey.

The Atlantic’s a cruel ocean –
It drowns men by the score,
But never a night like this one,
Six months before the war.

The Atlantic’s a cruel ocean –
It drowns men by the score,
But never a night like this one,
Six months before the war.

By daylight the next morning
Twelve bodies had been found.
They were laid in wooden coffins,
Lined up at Portholland.

On the Tuesday they were buried
In a grave at Veryan.
The coffins were slowly carried
By coastguards and fishermen.

The Sexton dug a simple grave
For the twelve men who had died.
He dug it long and narrow
Up on the cold hillside.

They laid the coffins end to end
The full length of the aisle.
The muffled bells were low and sad
As they stood in single file.

They laid the coffins end to end
The full length of the grave.
They lowered the coffins down and prayed
For those drowned beneath the waves.

Three further bodies, later found
Washed up along the shore,
Were buried here, in Veryan’s ground,
But three were seen no more.

And what became of the brave captain
Who fell from his ship and drowned?
And where was his poor body taken?
Where is his burial mound?

Some say his corpse, tossed by the tide,
And torn by the grim sea
Was recovered after a fortnight
And shipped home to Germany.

Some say that his remains were found
Much later on the shore,
And buried here, in Cornish ground,
To return home no more.

No matter if he rots in Cornwall
Or at home in Germany,
Dark was his end, and heavy the pall
He wore beneath the sea. 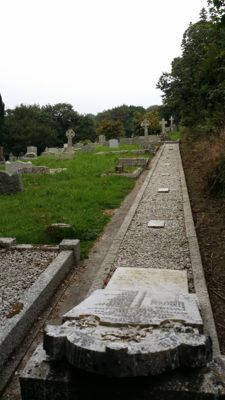 A note on the ballad

The ‘Hera’ grave is a striking sight – nearly a hundred feet in length, and clearly reminiscent of a ship. To find it, you climb a flight of mossy steps behind St Symphorian’s Church in Veryan, then take the right-hand path to the gates at the end, following the path as it winds round under the hedge at the top of the churchyard. Standing by the headstone, looking down to the church spire and the valley beyond, this is a peaceful spot in which to contemplate the fate of the German sailors buried here.

I've been fascinated by the Hera grave ever since 2000, when I first came to Veryan; and have always wanted to write a ballad about the shipwreck. The centenary year seemed an appropriate time to finally get something on paper. I used several sources to structure my narrative, including a booklet compiled by Susan Truscott and Christine Edwards, published in 2007 by Veryan Parochial Church Council. I also checked various facts with friends and neighbours in Veryan and Portloe, some of whom added details based on local knowledge, or memories handed down by word of mouth. The story still has a powerful grip on the hearts and imaginations of people living in this parish.

Having chosen the ballad form used by Coleridge for 'The Ancient Mariner', I soon found myself writing a far longer piece than I had originally intended; and it became apparent that I would need to split it into three sections. Stuart had the ingenious idea of giving a different tune to each section, to mark changes in tempo and mood. The ballad has been through a number of drafts, and I'm grateful to fellow members of the Hall Writers' Forum for feedback. Stuart was firm in his decision to leave out several stanzas at the end, in which I had framed the narrative with historical reflections on the First World War. He also made a few minor changes to the lyrics in places, to fit the metre to his chosen tunes. The day he came over to Oxford to make the recording, we put our heads together and did some further last-minute cutting. Many thanks to Peter King, for being there with us, in the chapel at St Edmund Hall, to encourage this spontaneous folk process – and of course to Stuart, for his beautiful arrangement and performance.

A note on the recording

In the popular imagination, the concertina is the musical instrument most commonly associated with seafaring; however, the historical record suggests that more often than not the sailors who took squeezeboxes on board ship actually armed themselves with much more cheaply-constructed melodeons, or button accordions.

The original owners of the instruments heard on this recording certainly wouldn't have risked exposing them to the ravages of salt spray, as they were pricey even then. Track one is played on a 1927 duet concertina made by C. Wheatstone & co., and tracks two and three on a duet concertina made by C. Jeffries. Jeffries instruments are notoriously difficult to date as the manufacturers did not mark their concertinas with serial numbers, nor leave behind much by way of documentation, but there's a good chance that it was around by the time the Hera was wrecked.

The tunes used here are all traditional, and all have been borrowed from other nautical songs. Part one makes use of a tune for "Young Sailor Bold" collected by Roy Palmer and Pam Bishop, and also makes reference to that great shipwreck ballad Sir Patrick Spens. Part two adapts a common tune for "Clyde Water" from the unsurpassable Nic Jones's singing, and part three is my own version of the usual tune for "Lord Franklin", which suddenly changed even as the tape was rolling. 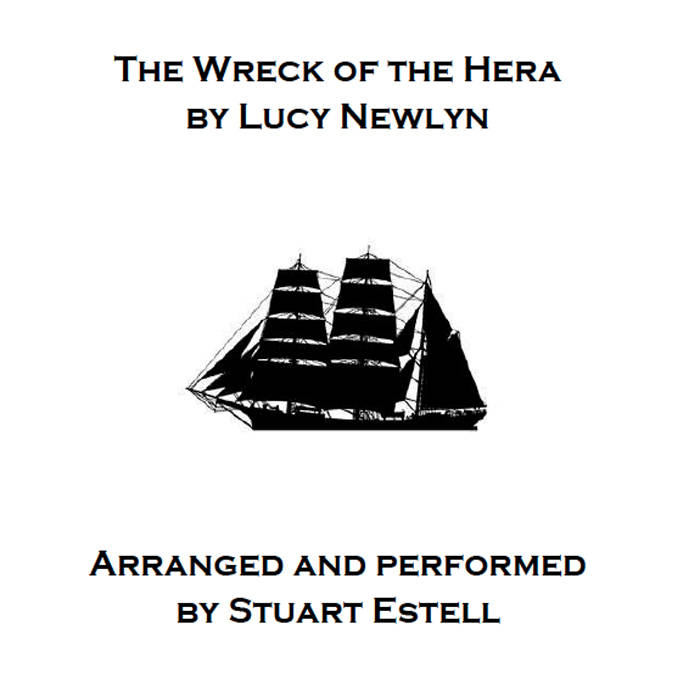