The orange: a meditation in seven parts

Slice the orange carefully in two
so a cross-section appears clearly in view.
As you’ll see, the halved fruit
produces in pithy silhouette
a perfectly formed woman
with an hourglass figure –
most juicy, most appetising
like the fragrant moist pulp
you are about to chew.

Back off a bit. Consider her other half,
which is this one’s mirror image
but hidden, and not quite so tender.
Her raised arms scream despair --
her twin lifts them in mute surrender.

Cut the orange in two, and as you can see
(unless you suffer from what Wittgenstein called 'aspect blindness')
the cross-section makes three alternating pictures:
1)Rough profiles of two people/moons facing each other
2)A stylised pudendum
3)A woman with an afro, dancing for joy.
So which is it to be?
It’s like a Rorschach inkblot, you see what you want to see.
Take your pick; it’s all subjective –
no pressure at all; no pressure.
Your choice won’t damage the orange
which has already been halved and photoshopped.
All it will do is give the game away.
Would you like to play?

What is it with you visual junkies?
Why do you rush to interpret and project?
Don't you realise this is a three-dimensional fruit?
Have you forgotten what it is to peel an orange, then to eat?
You’ll not fool me into seeing the patterns made
by dry goose-pimpled rind or spongy white pith
before I weigh the halved fruit in my hand
and touch the luscious flesh.
Your arid games won’t stop me peeling it,
or relishing a foretaste of the firm outer membrane giving
as my teeth bite; or stop me anticipating
the joyous rush of liquid as the skin splits.

But first, to delay my pleasure, I will wonder
at the beautiful symmetry of the fruit,
its smoothness (without pips)
and the regular formation of each juicy nodule
laid end to end and side by side
like raindrops, dewdrops, tears.
And I will worship the way two slightly truncated crescents
are nestled face to face, with an extra ball at the top
joining the halves to make a perfect sphere.
It's not gestalt; it's an orange.
Don’t hurry me. I’m happy with what I’m doing here.

You think it's half a juicy orange, huh?
Eyes are there to see with
so take another look.
Try turning it over in your mind:
you'll see it's the same the other side
and only a centimetre thick.

To my eye it's a dried-up slice
that's long past its sell-by date.
The sheen has gone off of the flesh,
the rind has darkened,
there's a dull tired look in the pith.
Don't be fooled by the illusionists;
it lacks succulence, lacks depth.
You wouldn't find it in my larder.

Okay, so here's the thing:
this orange has a malformation
and everyone so far has been
politely stepping round that fact --
out of puzzlement perhaps
or is it tact?

It isn't beautiful, because it hasn't grown
as a perfect sphere. It's just odd --
out of the ordinary, a blip in the system,
an exhibited blip.

It's an oddball orange, and no mistaking.
It has like an extra fruit growing
up at the top between the branches of pith,
which compensates for the lopped-off look
of the not-fully-formed segments.

Is there a scientist on the premises,
someone who could explain to me
why the segments grew as they did,
and why there are no pips?
I'd like to understand this orange's structure
and the history of its formation.
I'd appreciate any tips.

I went to sleep thinking of oranges
and the way, in Kampala,
mum used to buy them in bulk
from a woman in a brightly patterned robe
who stood behind a stall in the city market.
She would squeeze them, fresh,
standing at the window
that looked out on the mango tree.
Each glass needed two squeezed oranges
to make a worthwhile drink.
Think of it: she had mighty strong hands
and bought enough oranges
to fill six glasses every day
so in the course of a week
that’s a whole tree’s worth!

I woke thinking of oranges
and the way, in Oxford, I buy them
every now and then
from Waitrose in a netted bag of six,
and no-one eats them. Too laborious.

VII) Note to self

Is this an exercise in phenomenology?
If so, my technique has lost rigour;
I’ve got distracted by personal dreams
and there are still many angles.
Is it a writing binge that’s got out of control?
If so, I doubtless need more sleep.
I will go back to bed now
trying not to think of this extraordinary orange
or any other oranges.
I’ll think instead of a book that rocked the world
and how they’re not the only fruit. 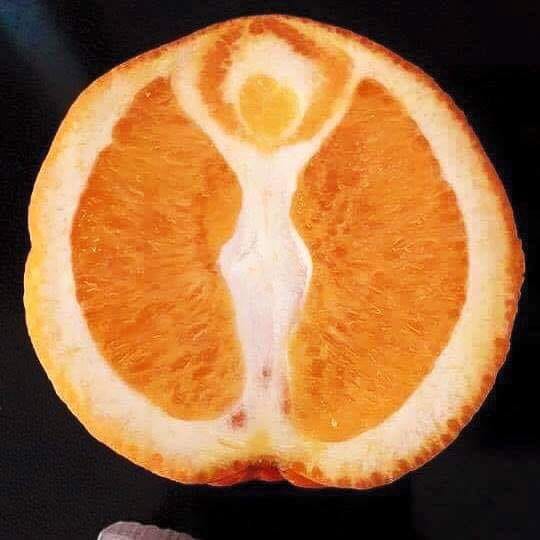