Did he meet his match at Taylor Ghyll,
hearing long before he saw it the rushing force
but unable to get the measure of it
thundering and crashing on the rocks below?
If it had been a sketch in watercolour
he might have surrendered less:
in the gaps where his brush gave up,
he could have suggested. Instead,
labouring for hours with his pencil, he
worshipped the coiling beck,
the wet crags, the shadowy recess,
and far off, the ghostly spectacle.

Did he hope to propitiate
that luminous spirit on the fell
by making a shrine to eternal beauty?
At a distance that was safe enough
he grasped its cold ethereal flow,
and there it stands: unearthly, calm,
a statue in white of flashing water.
This is the architecture of awe,
of mutual estrangement –
its one concession to motion and colour
a wash, the medium he shared
with the genius loci, but not in blue. 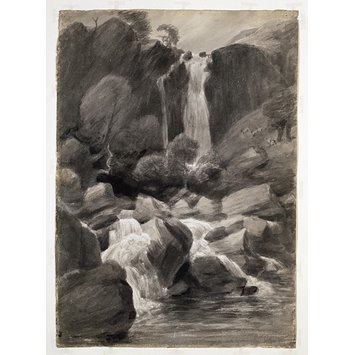