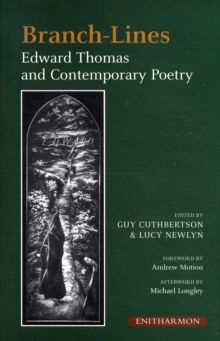 The one hundred and forty poems he wrote in the last two years of his life are a miracle. I can think of no body of work in English that is more mysterious. (Michael Longley.)

When Edward Thomas died in the First World War, very few of his poems had been published, but he is now recognised as one of the finest and most influential poets of the last century. Although often referred to as 'a poet's poet', his writing has an almost universal appeal. He wrote accessibly, on traditional themes - the natural world, human relationships, transience and mortality. And yet his poetry is alive with the critical intelligence that came from years of writing non-fiction and reviewing verse. "Branch-Lines" captures the range of Thomas' achievement, not least by combining poetry with prose. In this unique collection, fifty-five contemporary poets reflect on Thomas' craftsmanship and enduring power. Some have chosen poems of their own in which they detect his influence, others have written new poems in his honour. Each poet has also contributed a piece of prose, and the volume contains an introduction, four critical essays, illustrations, a foreword by Andrew Motion and an afterword by Michael Longley.

"Branch-Lines offers a fascinating perspective on the workings of literary influence, with personal insights from some of the leading poet-critics of our time. 'The collection has a double value. It is a celebration of Thomas, and dignified tribute to his achievement; at the same time it bears witness to his powers of regeneration" (Andrew Motion)

"I read Thomas' collected poems at a sitting, poem by poem, all the way through and felt as I had not felt since reading Lawrence and Graves ten years before: I love this man, I can learn from him." (David Constantine)

"He comes naturally, I think, to writers in English, like grass growing." (U. A. Fanthorpe)

"When I started to try and write poetry and prose, a very uncertain beginning, it would have been even more uncertain if I hadn't read Thomas' poetry in my teens." (Tom Paulin)

It is sweet to enter that peacefullest and homeliest of churchyards, St Peter’s in the East, overlooked by St Edmund Hall and Queen’s College and the old city wall. There is a peace which only the thrush and blackbird break, and even their singing is at length merely the most easily distinguishable part of the great melody of the place. Most of the graves are so old or so forgotten that it is easy – and in Spring it is difficult not – to perceive a kind of dim reviving life among the stones, where, as in some old, quiet books, the names live again a purged and untroubled existence. (Edward Thomas, Oxford: 1903)

On the path, hurrying
the other way, a young man
his age: head bent,
hand raised, listening
to his cell-phone, like
a traveller from afar.

High on the air waves,
signals weave and dance.
A lone blackbird flicks
between gables – quick
and random as the stray shell
that buried him in France.